The Spanish government, in their final meeting of 2017, authorised modifications in its agreement with the Basque regional government to move Spain forward in its process to become a full member of the European Spallation Source ERIC. The agreement allows ESS Bilbao’s critical contributions to the Accelerator and Target systems to advance.

LUND, MADRID and ZAMUDIO—A few days before the New Year, on December 29, the Spanish government gave the authorisation needed for accession to full membership in the European Spallation Source ERIC (ESS). Spain is expected to complete the formal membership process before the end of April this year. Spain was one of the earliest supporters of the ESS project and is home to ESS Bilbao, an important in-kind partner for the Target and Accelerator sub-projects.

The technical components for the ESS accelerator, target station, instruments and controls system are being built primarily through a series of European in-kind contributions that will come together in Lund like so many pieces of a puzzle. As a Founding Observer at the establishment of the ERIC in 2015, many of the Spanish in-kind contributions are well into design and development, with some technologies already in production.

“The decision in Spain is welcome news for the ESS project,” says ESS Director General John Womersley. “It allows the critical work being done at ESS Bilbao to move forward, and maintains the integrity of the overall project schedule.”

ESS Bilbao, which manages Spain’s in-kind contributions to ESS, has been working on the collaboration as far back as 2009. Teams based in Madrid and the Basque town of Zamudio, near Bilbao, will produce several sub-systems for the ESS linear accelerator (LINAC) and will deliver the ESS target system, including the target wheel, its shaft and drive unit, as well as the system’s enclosing vessel. ESS Bilbao also made the first major in-kind delivery to Lund in late 2016—shielding blocks for the Accelerator’s tuning beam dump.

“ESS Bilbao is now on the right track to fulfil our commitments to the ESS project,” says Pedro González, Director of Technology and interim Director for ESS Bilbao.

ESS Bilbao is building one of the elemental LINAC systems, the medium energy beam transport (MEBT) line. Though only a four-metre stretch of the 500-metre LINAC, the MEBT is densely packed with hundreds of sub-systems designed to shape and characterise the proton beam, as well as clean it of unwanted particles, as it moves from the source to the superconducting stages of the Accelerator. A clean, well-tuned beam prevents energy losses, along with unwanted radiation, further down the LINAC.

“We are extremely happy with the work Bilbao is doing,” says Head of the Accelerator Division at ESS Mats Lindroos. “ESS and Bilbao have a good collaboration. They have today a very competent, well-trained, and very good team in Spain.”

A major challenge for the team in Zamudio lies in integrating the many focusing elements and sub-systems into the MEBT’s limited space. As components have begun to arrive from regional suppliers, Bilbao engineers are focused on fitting them together into a single system. This process also requires concurrent integration of the ESS control system in collaboration with the ESS Integrated Control System Division (ICS).

“The MEBT has many complex interfaces involving several different work packages, and thus requires highly qualified specialist personnel,” says Ibon Bustinduy, Head of the ESS Bilbao Accelerator Division. “At this stage of the project, most technical challenges have been overcome.”

At @BilbaoEss seeing good progress with klystron conditioning for @essneutron RF sources and with controls for beam instrumentation pic.twitter.com/EJKdIkFenO

A second key delivery for the ESS Bilbao accelerator team will be the Radio Frequency (RF) systems used to power the normal conducting LINAC at the front end of the Accelerator. Power systems and beam tuning go hand in hand—a clean beam requires the perfectly timed delivery of clean power.

“[ESS Bilbao] will do a turn-key system for ESS that includes klystrons with their controls and modulators,” explained Lindroos. “Three high-voltage, high-current modulators are being manufactured in San Sebastian, three klystrons are on order, and three others are currently being tested and conditioned at Bilbao’s RF test stand.”

Located in the Gallery Building that runs for 500 metres adjacent to the LINAC, the klystrons serve as RF power amplifiers for the Accelerator’s proton beam. ESS-designed modulators are coupled to the klystrons to supply them with precisely timed jolts of clean power by converting conventional AC power into pulsed power.

Conditioning the klystrons involves powering them up slowly to remove impurities throughout the RF system. It is a crucial step in the process to prepare the RF systems for use under the unprecedented power load of the ESS Accelerator, which is designed to be the most powerful proton LINAC in the world.

An introduction to the ESS LINAC, with interactive 3D models.

A basic introduction to the ESS Target Systems

The ESS Target Station is a complex, multifaceted project that requires build expertise on every level of engineering—from the basics of meeting stringent seismic and safety requirements to integrating thousands of technical specifications into the brute force construction of massive amounts of steel and concrete. At its heart is the target system itself, where neutrons are generated for use in scientific experiments at a rate of 1018 per second. This is where ESS Bilbao is making the critical contributions. 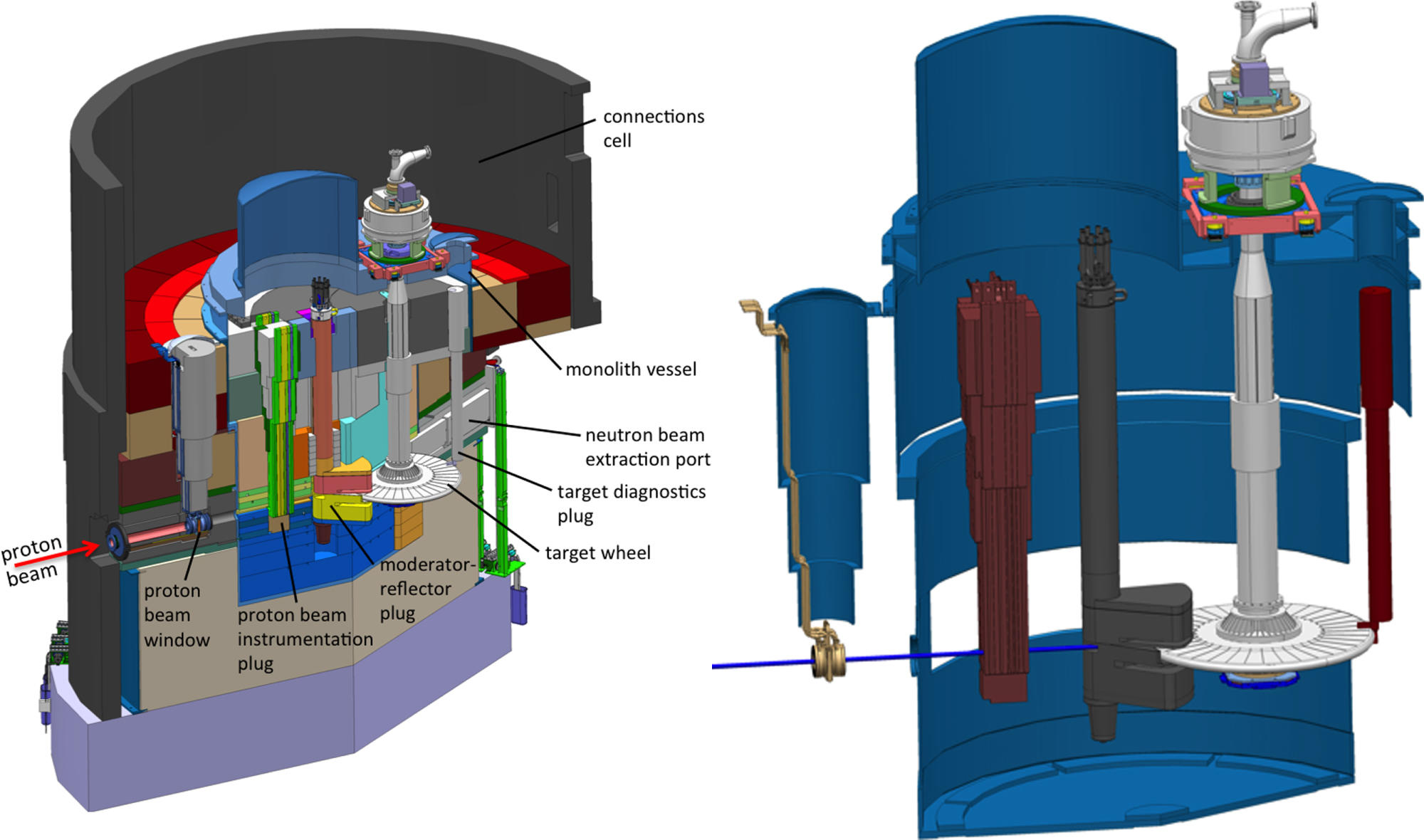 “The teams at ESS Bilbao have a good understanding that building a first-of-its-kind target is a continuous process of meeting and solving obstacles, and then regrouping to go on to the next challenge,” says Mark Anthony, Head of the ESS Target Division. “They keep a strong focus on the quality of the work package deliverables.”

The target wheel design from Bilbao consists of approximately 7,000 tungsten bricks cradled in 36 stainless steel, helium-cooled cassettes and wrapped in a pressurised stainless steel vessel. The wheel turns at 23 1/3 RPMs as the proton beam falls on each segment at a frequency of about 0.5 Hz. The wheel spans 2.6 metres in diameter and weighs in at around five tonnes.

Fernando Sordo, as Head of the Target Division at ESS Bilbao, has been leading the project for several years: “The work on the wheel components has markedly advanced in the last year. Designs for the spallation material and the cassettes were finalised in late 2016. Ten cassettes have been completed and we are now well into manufacturing the [tungsten] spallation material. Additionally, we have completed a prototype of the target wheel’s main shaft.”

The design and full-scale prototyping of the target system is now nearly complete. The construction of prototypes serves to verify the different steps of the production process, including machining, welding and inspections. This will ensure that the final construction takes place under the strictest industrial quality controls available, and will prepare Bilbao for the next step: the CDR, or complete design review, scheduled for mid-February.

A recent and considerable milestone for Target was the delivery of the twister shaft from its German manufacturer to ESS in-kind partner FZJ. Read more:

The ESS Target Division has announced that manufacturing of all three Butterfly V2 cold moderators was completed in December. Read more:

Progress according to plan
view