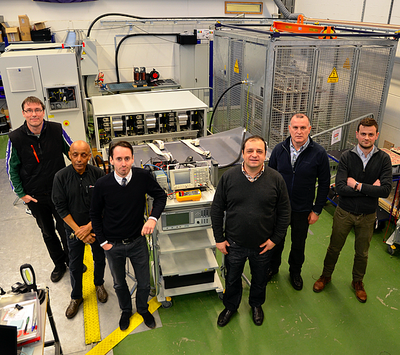 How Do You Power the World’s Most Powerful Linac?

The RF group is lead by Anders Sunesson and it has two sections, Power Converters and RF Sources.

The RF system for the ESS linac is defined as the system that converts AC line power to RF power at either 352 or 704 MHz to be supplied to the RF accelerating cavity couplers.

The AC conventional power lines on one side and the waveguide power couplers on the accelerating cavities on the other side bound the RF system. To deliver an average beam power of 5 MW with a 4% duty factor (2.86 mSec pulse at a rate of 14Hz), the linac RF systems must supply over 123 MW of peak power.

The main components of the RF system are:

RF distribution transports the RF from power amplifier to cavity coupler, which are typically waveguides with other components (circulators, directional couplers, etc.)

LLRF takes the cavity field signal from probe, controls it in digital domain with feedback and feedforward,  and generates an input signal to the amplifier that drives the cavity to a field with a phase and amplitude that are within 0.5% and 0.5 degree of a set value, unique for each cavity.

Because of the large power density, 98% of the linac consists of superconducting radio frequency (RF) resonators that are used to transfer power to the beam. Superconducting resonators by nature exhibit 100% beam loading which brings interesting challenges to the RF system. However, the ESS design is much different than other superconducting LINACS.

The ESS linac uses protons instead of H- ions, does not inject into a ring, and is heavily coupled due to high beam current and has a large system bandwidth. These three factors might indicate that the tolerances on RF control do not have to be as stringent as a low beam current linac injecting into a ring. However, because of the high gradients required in the ESS linac, the Lorentz detuning in the superconducting cavities can span over 40 degrees of RF phase.

In addition, unlike short pulse LINACS, the beam pulse length is much longer than the mechanical response time of the cavity due to Lorentz detuning. It will be assumed that the superconducting cavities are equipped with fast piezo-electric tuners to compensate the Lorentz-detuning.