The Linac group is led by Håkan Danared and it has three sections: Accelerator Integration, Front End & Magnets, and Superconducting RF.

Where the protons are created and accelerated up to 90 MeV. 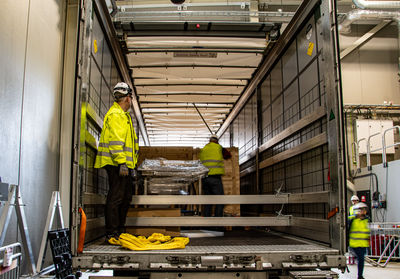 The MEBT ready for installation in the Accelerator

An elemental accelerator component, the MEBT (medium energy beam transport), was delivered at ESS in Lund this week after a journey from Spain. This key technical system is an important Spanish in-kind contribution that has been designed, manufactured and delivered by ESS’ in-kind partner ESS Bilbao. 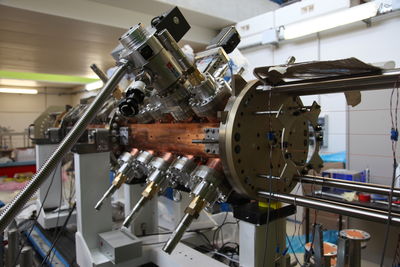 A key accelerator component has been delivered to ESS as part of France's in-kind contributions to the next-generation research infrastructure. The Radio Frequency Quadrupole (RFQ) is the first accelerating structure in ESS's linear accelerator and has been designed, developed and manufactured by French in-kind partner CEA at its research institute IRFU (Institute of Research into the Fundamental laws of the Universe).

The Microwave Discharge Ion Source (MDIS), based on the electron cyclotron resonance, creates in a closed chamber a highly ionised plasma from which the proton beam is generated and accelerated by an extraction voltage of 75 KV. The MDIS is therefore the proton beam generator but also the first place where the acceleration occurs. After the MDIS the proton beam has an energy of 75 keV.

The Low Energy Beam Transport (LEBT) line is a structure of roughly 2.4 m in length with two magnetic solenoids used to match the beam from the ECRIS into the subsequent accelerating structure, the RFQ. Matching the beam, i.e. transforming the latter in order to produce given characteristics, is very important since accelerating structures needs well-defined input beam parameters to achieve their nominal functionalities.

The Radio-Frequency Quadrupole (RFQ) of the 4 vanes type is composed of five segments of ~90 cm each. The 4.6 metre structure accelerates the proton beam from 75 keV to 3.62 MeV. It is the fisrt RF accelerating structure. The RF for the ESS RFQ is set to 352.21 MHz. In addition to accelerate the beam, the RFQ shape the continuous beam in a train of bunches. Each RF period contains one bunch.

The Medium Energy Beam Transport (MEBT) line matches the beam coming from the RFQ into the subsequent accelerating structure, the DTL. It uses RF bunching cavities and magnetic quadrupoles to match the beam in the longitudinal and the the transverse planes. The length of the MEBT is roughly 3.9 m.

The Spoke linac is the first stage of superconducting acceleration in the ESS, and takes the beam from the exit of the Drift Tube Linac at an energy of 90 MeV, and accelerates it to 216 MeV, at which point it is injected into the Elliptical linac.

The proton beam will be accelerated through 26 double-spoke cavities, which are gathered in 13 cryomodules.

These Niobium cavities will resonate at a frequency of 352.21 MHz, using the RF system in order to deliver an accelerating gradient of 9 MV/m.

The double-spoke cavities operate in superfluid helium and cryomodules are maintained in a cryogenic and vacuum environment.

Double-spoke cavities were chosen for this part of the machine due to their large momentum acceptance, their very rigid mechanical qualities, and the high degree of field flatness that it is possible to achieve within them. 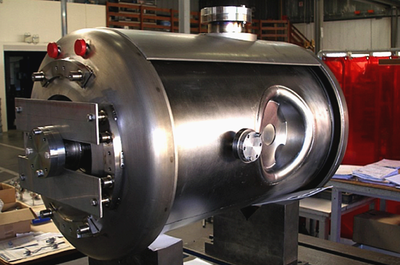 CNRS and ESS Advance a New Standard for Linac Design

An important test result was achieved at the accelerator lab of the French Institute of Nuclear Physics, IPN-Orsay.

Superconducting acceleration technologies play a very important role in ESS since they allow the machine to be designed so as to be tremendously flexible and tolerant of technical problems. While capable of supplying up to 400 kW of power to the proton beam, the almost complete lack of any resistance to the electromagnetic field on the walls of the superconducting cavities means that only a few Watts of this power is lost.  This lost power will, of course, provide a load on the cryogenic system that is significantly larger than this, however the total losses will be far lower than would be experienced in a more traditional "room temperature" linac.

The Elliptical Superconducting Radio-frequency Linear Accelerator (linac) takes the beam from the exit of the Spoke Linac at an energy of 216 MeV, and accelerates it to 2.0 GeV, at which point it is injected into the HEBT.

The medium-beta linac and high-beta linac are composed of 36, 6-cell and 84, 5-cell elliptical cavities, with operating gradients of 16.7 and 19.9 MV/m, respectively. The duty cycle for the elliptical SRF cavities are expected to be on the order of 4 %.

Elliptical cavities operate in superfluid helium and are housed in cryomodules maintained in a cryogenic and vacuum environment. Each medium and high-beta cryomodules houses four cavities and they have similar external envelopes. 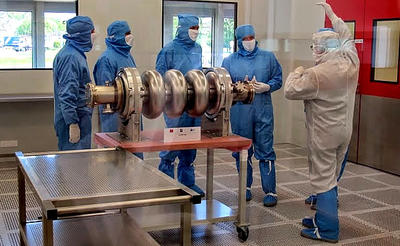 Led by France, Italy and the UK, ESS is Pushing Accelerator Technology to its Limits

France's CEA, is guiding the design, production and testing of the superconducting radio-frequency elliptical cryomodules.

The linac layout optimization has been carried out taking into account the limitations of SRF cavity performance, which is mainly electronic field emission. This is reflected in the choice of the parameters such as the maximum accelerating gradient Eacc, and the peak electric field on the surface Epk.

Each elliptical cavity is equipped with one fundamental power-coupler, which supplies up to 1.1 MW of power to the proton beam.

The High Energy Beam Transport (HEBT) is the final section of the ESS accelerator. It will take the proton beam from the superconducting cavities of the cryomodules to the target, a distance of about 240 meters, at 96.2% of the speed of light.

When entering the HEBT the proton beam will have a diameter of about 2 mm and an average beam power of 5 MW. This concentration of energy will penetrate the stainless steel wall of the beam line in the blink of an eye, if not guided. The beam is steered by a series of magnets as it progresses towards the target. About 30 m from the target window, which is located directly in front of the target, to reduce the time-averaged beam intensity, the ESS will utilize a fast AC transverse Raster Scanning Magnet (RSM) system that introduces beam centroid displacements across the target and proton beam window.

The total raster system consists of 8 colinear RSMs, two sets of 4 acting in the respective transverse planes. Having passed through the window the beam continues to the target where the spallation process occurs. Neutrons resulting from this interaction are guided through neutron guides to the neutron instruments where a variety of science can be performed at the molecule level. 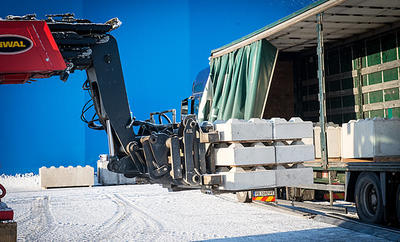 The beam is maintained on the axis of the beam line, normally 100mm in diameter, by a series of dipole, and quadrupole magnets. As the beam line approaches the target it is increased in size to accommodate the expanding beam. No acceleration is imparted as the proton beam traverses the HEBT, the drift section of the accelerator, which will operate at a nominal pressure of 10-7 mbar as it approaches the target.

The areas right upstream of the target and tuning beam dump windows will be activated and special precautions will be needed taken during maintenance. The use of shielding, long handled tools and/ or remote handling techniques will be needed. To perform hands-on maintenance in those areas, a gamma blocker will be rotated into the beam line to block back streaming gamma radiation either from the target or tuning beam dump.

Radiation hard components will be used in this area and these will need to exhibit a high level of reliability. The strategic use of redundant components and local shielding will need to be considered. Ion pumps will be the preferred choice for pumping the beam line having no onboard electronics and controllers that can be located remotely. Vacuum instrumentation is also of concern and careful attention will be need to be given to location and shielding. Valves will need to be metal sealed where possible.

Corrosion considerations are also important with the potential for the formation of nitrous oxide as a result of irradiation of the air.

We help to bring the ESS Accelerator to life.