The European Spallation Source is the story of a new facility built on an established vision. Daily progress on the construction site and in the development of the technical components make it clear that ESS, after 20 years, is a reality. European nations are together building a neutron source of unparalleled power and scientific performance, with its home in southern Scandinavia.

On 3 February 2011, representatives of the then 17 Partner Countries backing the European Spallation Source gathered at the Swedish Embassy in Paris. A Memorandum of Understanding was signed, codifying three established principles upon which the project could proceed as expected: an acceptance of Lund, Sweden, as the site for ESS; an agreement to collectively proceed with the Design Update for the facility; and an understanding that best efforts would be made by all parties to begin construction within a reasonable time frame. With the technical design and specifications established and construction of the facility in Lund well underway, ESS and its partners know what needs to be done to bring the vision to reality. The way forward, however, was not always as clear as it is today.

Neutron science traces its origins to the post-World War II experiments of Clifford Shull and Ernest Wollan at the Oak Ridge National Laboratory in Tennessee, and the concurrent work of Bertram Brockhouse at the Chalk River Nuclear Laboratory in Ontario, Canada. These physicists first discovered the potential of neutrons to produce indirect images of molecular structures, a discovery the broader implications of which were not fully recognised for half a century, when, in 1994, Shull and Brockhouse were awarded the Nobel Prize. Many in the scientific community, however, understood quite well the potential of these discoveries, and worked collectively through the 50s and 60s to make best use of them.

Neutron science was consolidated on a large scale with the construction of the world’s first major neutron source in Grenoble, France. The Institut Laue-Langevin (ILL), as the facility was christened, began producing neutrons in 1971, via nuclear fission reactions, for the specific purpose of neutron imaging. The European community of neutron scientists was born.

Other neutron sources, large and small, were soon producing pioneering work the world over, including the first proton linear accelerator built for the purpose, ISIS. This facility, known as the first high-powered spallation source, was constructed over several years from a number of conceptual designs. The goal of those early efforts was to produce a brighter, more powerful source of neutrons that would not carry the heavy baggage of nuclear fission reactors. Built in Oxfordshire, England, ISIS began operations in 1985. This new and complementary approach to neutron imaging established a hothouse of innovation that included a range of new instrument stations for neutron experiments. It was the radical success of ISIS that eventually suggested the possibility of a spallation source far more powerful, and now less technically speculative. By 1993, the European Neutron Scattering Association began to advocate for what would be the most ambitious and broad-based spallation source in the world, ESS.

Meanwhile, research was continuing apace at the existing neutron sources and important discoveries were being made across a broad spectrum of scientific disciplines and industrial applications. Neutron science was becoming a critical tool in the development of industrial and consumer products worldwide. So much so that the Organization for Economic Development (OECD), a global consortium of economically advanced nations, declared in 1999 that a new generation of high-intensity neutron sources should be built, one each in North America, Asia and Europe.

The US and Japan moved quickly to establish major spallation sources over the next decade. Europe, home already to the two world-leading neutron sources, moved forward at a more deliberate pace. Looming ahead was the challenge of organizing Europe's diverse collection of national governments, and an active research community numbering in the thousands. The road to success was neither straight nor level.

An international task force assembled the scientific, technical and economic case for the new spallation source. Stakeholders gathered in Bonn in 2002 to review the findings and a positive consensus emerged, though at the same time this meeting initiated a fundamental reshaping of the project. The technical design, it was agreed, would be scaled back to aspirations deemed more attainable. In addition, the candidate pool for the project’s location was expanded  to include a range of European possibilities.

The stakeholders group met a year later to review the task force’s progress, and in 2003 a new design concept was adopted that set the course for the delivery of ESS’s first neutrons by 2019. The challenge then shifted from technical to administrative: a site and host nation for the project needed to be selected, and the group had to formalise its organisational structure and governance before the project could move forward.

Over the next five years, a competitive and yet collaborative site selection process played out that resulted in three contenders: Lund, Sweden; Debrecen, Hungary; and Bilbao, Spain. Ultimately, Lund was chosen as the preferred site, with the negotiated endorsements of both Spain and Hungary. Following a site review process overseen by the ESS stakeholders, the definitive selection of Lund was announced in Brussels on 28 May 2009.

The team, led by Colin Carlile and based at the time at Lund University, went straight to work establishing an organisational structure that would oversee the future of the project. Two lines of governance were created: a steering committee, composed of representatives from the many partner countries; and a board of directors, formally bound to represent the interests of Sweden and Denmark, the legal and administrative owners of ESS. In 2010, ESS became ESS AB, a publicly held company with 75% of its stock held by Sweden and 25% by Denmark.

The ESS Steering Committee held its first meeting in Copenhagen in October 2009, signalling the beginning of the Pre-Construction Phase and the true launch of a vision that had been over 25 years in the making.

The European Spallation Source was designated a European Research Infrastructure Consortium, or ERIC, by the European Commission in August 2015. This established a new legal standing for the project. Organisational and governance changes followed when ESS completed the transition from ESS AB to European Spallation Source ERIC on 1 October 2015. The project will enter Initial Operations in 2019, and expects to welcome its first researchers in 2023. 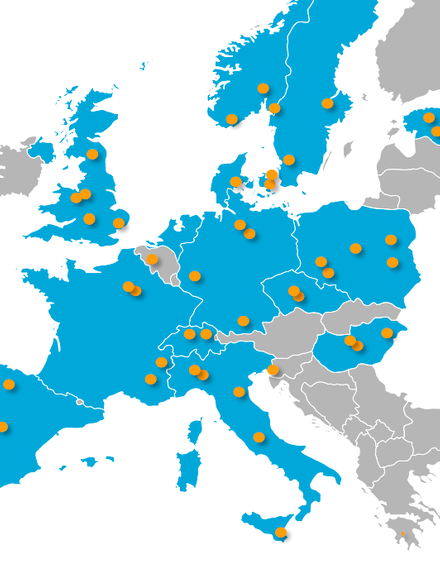 Building ESS requires expert competences represented by professionals from all over the world.

ESS is growing daily. See the weekly progress, aerial views of the site and live webcams.

The European Spallation Source recruits globally to fill a broad range of positions.