Members of a strategic consortium of neutron research facilities in Europe, the League of advanced European Neutron Sources (LENS), officially launched activities to promote collaboration on neutron usage, technology development, innovation, data, education, and strategies. By aligning policies among its partners, LENS will advocate for the user community and strengthen European neutron science.

LIBLICE — The members of LENS held their first General Assembly and the first Executive Board meeting on 26 March 2019 in Liblice, the Czech Republic. The consortium adopted and signed Statutes detailing the purpose of LENS, guiding the work of the statutory bodies, and laying the framework for Working Groups responsible for the execution of foreseen activities. The Director of Institut Laue-Langevin (ILL) in France, Helmut Schober, was elected as LENS Chair, and the Director of the ISIS Neutron and Muon Source in the United Kingdom, Robert McGreevy, as Vice-Chair.

A community event to mark the launch of LENS

The signing ceremony was followed by a public event that celebrated the launch of LENS in the presence of around 80 government representatives, national delegates to the European Strategy Forum on Research Infrastructures (ESFRI), the European Commission, and the wider scientific community.

“Research on materials will provide the basis for technologies of the future that are needed to achieve a sustainable, high standard of living all around the globe,” said the newly elected Chair of LENS, Helmut Schober. “LENS will help to develop these technologies by optimising the use of resources for neutron investigations through strategic coordination among neutron facilities.” 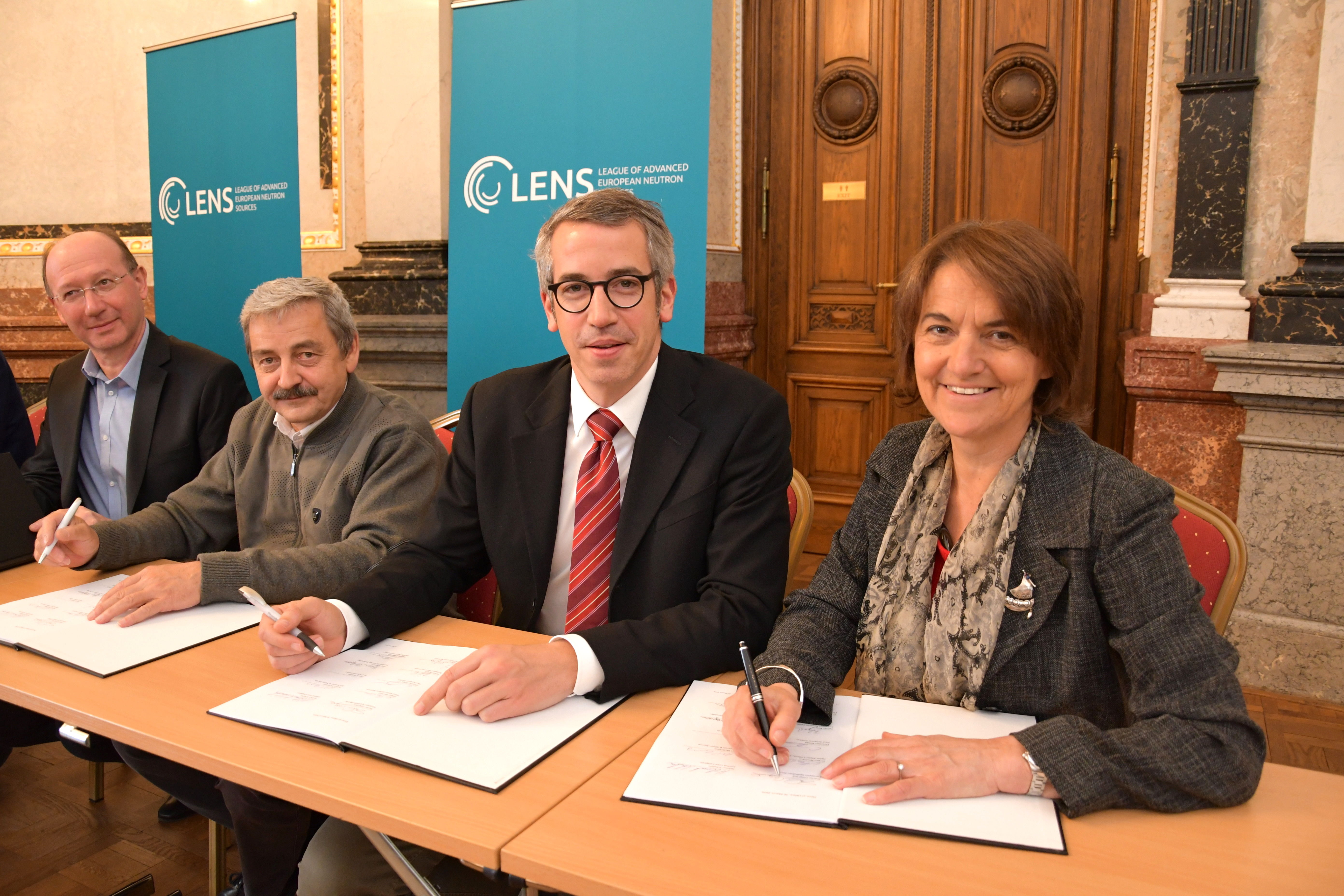 The event also featured panel discussions about the long-term sustainability of neutron sources, and the various ways in which neutrons contribute to excellent science and advance innovation. As a collaborative effort that aims to benefit researchers and address their needs, LENS seeks to establish good working relations with the European Neutron Scattering Association (ENSA). LENS will be in close dialogue with the League of European Accelerator-based Photon Sources (LEAPS), a strategic consortium that brings together synchrotron radiation and free electron laser user facilities in Europe. Representatives of both ENSA and LEAPS joined the LENS launch event in Liblice.

The member base of LENS expands

LENS was established in September 2018 with the primary goal of facilitating discussions and decision-making processes that have the potential to strengthen European neutron science. The eight founding members include national and international neutron facilities from France, Germany, Hungary, Norway, Sweden, Switzerland, and the United Kingdom. As a founding member, the European Spallation Source has been an active supporter of LENS from the very beginning.

“Europe’s landscape of neutron sources is in transition, with a number of older reactor sources reaching the end of their lives, while at the same time major investment in ESS will deliver entirely new capabilities to the community from the middle of the next decade,” said ESS Director General, John Womersley. “By bringing all of Europe’s neutron facilities together, LENS will help manage this transition. We want to show that the national and European facilities can work coherently together to deliver the best science opportunities to Europe’s researchers and industries.”

The LENS launch in Liblice marked the first expansion of the consortium’s member base. Forschungszentrum Jülich from Germany with its Jülich Centre for Neutron Science (JCNS) was welcomed as the ninth member. LENS is open to new members and other qualifying neutron facilities which grant international access to their experimental devices and research services are invited to join at any time. In this way, LENS helps to contribute to the scientific integration of Europe. The event was held on the eve of the 68th ESFRI Forum Meeting, which brought together senior science policy officials representing Ministries responsible for research in each of the participating state.

“We welcome the launch of LENS. Coordinated efforts of this type support a better use and development of research infrastructures in Europe. This is well in line with the vision that ESFRI has for European science, “ said Jan Hrušák, ESFRI Chair.

Solving the grand challenges facing society often requires the development of new high-performance materials. Tailor-made materials and material systems are required for the advancement of key technologies, from information technology and renewable energy concepts, to safer and more environmentally friendly transport systems and life-saving medical applications. Probing materials with neutrons stands as one of the pillars of the analytical techniques in this chain of discovery.

Neutron-based analytical facilities, therefore, are used in numerous disciplines across the entire range of science and technology development, and generate a high socio-economic impact. Europe has achieved global leadership in this field, serving a very broad scientific community of more than 5 000 researchers by providing them with more than 32 000 instrument days at neutron scattering facilities.

LENS is supported by BrightnESS². BrightnESS² is funded by the European Union Framework Programme for Research and Innovation Horizon 2020, under grant agreement 823867.

Representatives of eight European research infrastructures, including the European Spallation Source (ESS), signed the charter of the League of advanced European Neutron Sources, or LENS, today.