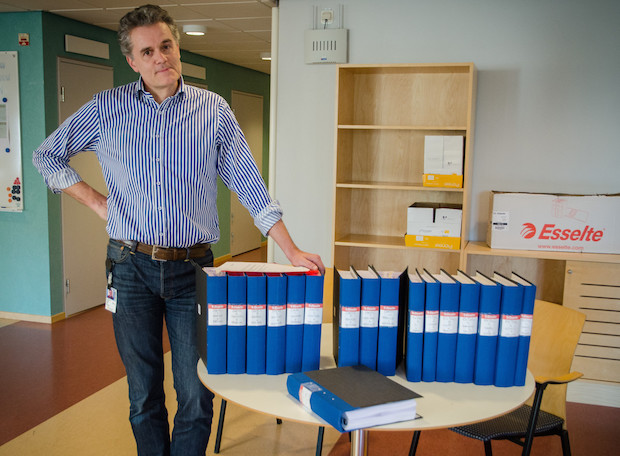 SSM Application.
Today the European Spallation Source ERIC (ESS) submitted an application to the Swedish Radiation Safety Authority (Strålsäkerhetsmyndigheten, SSM) for installing equipment which can generate ionising radiation in the research facility now under construction in Lund. This is the second application in the licensing process, which consists of four stages in total before the material research facility can go into operations.

LUND—The application submitted to SSM today is for a license to install equipment in the Accelerator tunnel and other parts of the facility which can generate ionising radiation. ESS also applies for permission to test drive the first part of the Accelerator, which is approximately 50 metres in length.

The materials research facility ESS is based on the world's most powerful neutron source, and once the research programme begins, samples will be examined on an atomic and molecular level using neutrons. When producing the neutrons, ionising radiation and radioactive substances are generated in parts of the research facility. This means that ESS must follow the Radiation Protection Act in order to protect staff and the surrounding area. SSM will ensure that ESS adheres to the rigorous safety requirements.

"ESS takes safety very seriously and we will follow SSM's instructions to the letter," said Peter Jacobsson, ESS Head of Environment, Safety, Health and Quality. "This application is far more extensive than the first and provides SSM with a good basis to make a decision."

The application includes detailed descriptions of the facility's construction and how SSM's requirements should be met. ESS also presents revised calculations regarding the total amount of radioactive waste the facility will produce during the entire operations period, including the decommissioning phase, which will be significantly lower than previously indicated.

SSM will now process the ESS application, and is expected to reach a decision before the summer of 2017.

"The ESS project is under a tight time schedule, and to maintain our planned completion goals it's important that we've delivered such a thorough application to SSM", said John Haines, ESS Associate Director of Environment, Safety, Health & Quality. "We have a good dialogue with SSM, which is essential for a licensing process consisting of several steps like this one, where many different safety aspects must be taken into account."

In July 2014, ESS received the first license from SSM to build the research facility in Lund. The construction works were then initiated at the ESS construction site, with expected completion in 2019. The entire licensing process for ESS consists of four stages, where the next two refer to test operations and full operations of the facility.

The ESS Accelerator team will get full access to the Accelerator tunnel in 2017. ESS plans to produce the first neutrons in 2019 and be fully operational by 2025.