Skip to main content
ESS, Institut Laue-Langevin and Linköping University.
The little building with the forgettable name has the attention of neutron science facilities across Europe.

LUND, GRENOBLE, LINKÖPING — The European Spallation Source (ESS) and Linköping University (LiU) are holding a ceremony to inaugurate the ESS Detector Coatings Workshop in Linköping, Sweden, today. It is a production facility used to apply thin films of boron-10 carbide (10B4C) onto neutron detector substrates, such as aluminum. The use of boron carbide film is a new technique for detectors, and the coated aluminum plates will serve as the neutron impact point on the new MultiGrid detector designed at Institut Laue-Langevin (ILL) in Grenoble, France. This is the design ESS intends to use for its first large-area detectors. 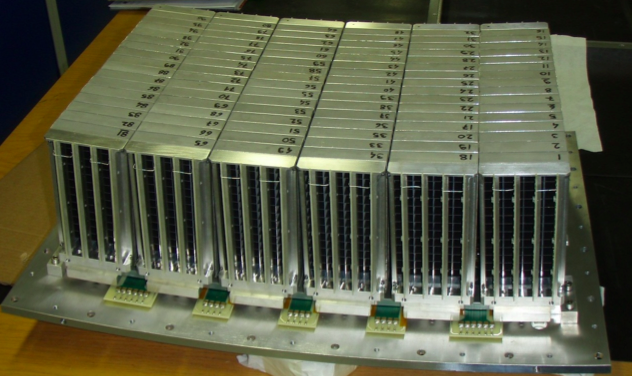 In this image of the ILL demonstration detector, the 10B4C layers are horizontal and neutrons arrive from the top. The 6 modules of 16 grids each form an assembly of 360 gas-filled tubes, 24 tubes wide and 15 deep, which are visible on the front side. Each tube is read out by an anode wire. Provided courtesy of ILL.
“The joint MultiGrid project demonstrates the feasibility of building a boron-10 detector with the same efficiency, and at a comparable cost, as the equivalent helium-3 detector,” says Dr. Charles Simon, associate director and head of the Projects and Technique division at ILL. “In the context of European neutron science, the construction of many new instruments provides a great opportunity to use this new concept in the future.”
There is much more work to be done in Linköping, the nerve center for tailoring thin films to specific applications. “The critical focus has been on very large detectors,” says Höglund, “but there are also maybe 10 other labs we are working with to develop the process for other types of detectors and substrates.” Some smaller detectors use fiberglass or plastic substrates, for instance, which cannot tolerate the temperatures aluminum can. Other detectors require the coatings to be applied to more complicated shapes. “There we have a very big challenge to find the solutions.” The production facility’s proximity to LiU’s labs and researchers will allow for an efficient transition from process development to production.

Press releases for this event can be downloaded in English and Swedish using the links below.